A Quick History of the Irish Streets of Monopoly

Monopoly is one of the biggest selling board games of all time, behind only Chess, Checkers and Backgammon. The game focuses on buying and trading properties, developing them with houses and hotels, charging rent to opponents who stumble into your land and all going well, driving them into bankruptcy. It’s a ruthless game and the catalyst for family arguments the world over.

The classic Irish Monopoly board makes for quite an interesting journey around our capital city, so we’ve paused to briefly explore all 22 of the locations, from the affordable brown properties of Crumlin and Kimmage to the aspirational purples of Ailesbury and Shrewsbury Road.

Join us on our Monopoly tour of Dublin.

We kick off our Monopoly board tour on the southside of Dublin city. Crumlin is one of Dublin’s oldest suburbs. It developed as an Anglo-Norman settlement after the Norman Conquest in 1170, but the circular layout of the old graveyard at Saint Mary’s Church suggests it was a recognised settlement even before then. Today, Crumlin is probably best known for being the hometown of more than its fair share of notable Irish talents in film (Gabrial Byrne), literature (Brendan Behan), music (Phil Lynott) and sport (Paul McGrath and Conor McGregor). 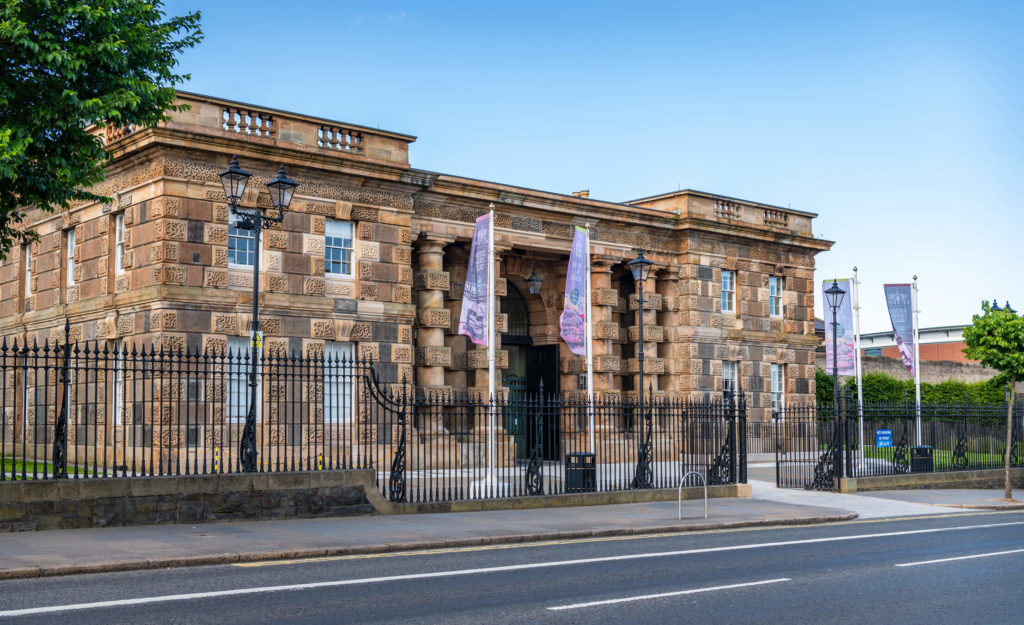 A short stroll north east will get you to Kimmage, its name stemming from the Irish Camaigh uisce or “crooked water-meadow” which likely refers to the River Poddle’s track through the area.

Joseph Plunkett (1887-1916), one of the seven leaders of the Easter Rising had a family property at Sundrive Road which was used as a training ground for the rebels before the rising.

Sadly, for those who held a soft spot for Kimmage (it was always so good to us when Monopoly times were tough!) it was replaced in favour of Rathfarnham in the newer edition of the game.

Rathgar lies about 3 km south of Dublin city centre. In the Middle Ages, Rathgar was a farm belonging to the Convent of St Mary de Hogges. As part of King Henry VIII’s Dissolution of the Monasteries, which saw monasteries, priories, convents and firaries disbanded and their income and assets appropriated, Rathgar was granted to the Segrave family. The family built Rathgar Castle but following centuries of decay and ruin, you’ll find no trace of it today. It is thought it once stood on the corner of what is today, Highfield and Orwell Roads.

One piece of history you will be able to spot in the area is the birthplace of famous poet and novelist James Joyce. The red brick building on Brighton Square is marked by an understated plaque.

One of the longest roads in the city, the South Circular Road runs from Kilmainham which is west of Dublin city, through Rialto and Dolphin’s Barn to Portobello in the south of the city.

This area of Dublin was covered by countryside until the 18th Century, with the first building project in the area commencing in 1813 – a prison that would become Richmond Gaol and then Wellington Barracks.

Rathmines, once again 3 km from Dublin city centre has a much longer history dating back to the 14th Century. While many believe that the name must be associated with some mining activity in the area, Rathmines, in fact gets its name from the Irish, “Rath Maonais, meaning “ringfort of Maonas”. Maonas is thought to refer to the de Meones family who were planters from England who had a ringfort in Rathmines.

In the 17th Century, an English Parliamentarian army defeated an army of Irish Confederate and English Royalists in the Battle of Rathmines in 1649. The result held huge significance, clearing the way for Oliver Cromwell to begin his four year conquest of Ireland when he landed with his troops just weeks later. When Joshua Dawson purchased an area of land east of Grafton Street (at the time an unremarkable laneway) in 1705, he had big plans. He successfully transformed the area from swampy marshland to one of Dublin’s most fashionable streets.

By 1706, construction of his house in the street was completed. We know it today as the Mansion House. Home to what is officially the city’s smallest pub (the Dawson Lounge) and one of the oldest book shops in the world (Hodges Figgis, founded in 1768) Dawson Street continues to be a street full of interesting talking points. Kildare Street is named after James FitzGerald, the 20th Earl of Kildare and later Duke of Leinster. It was the FitzGerald family who built Leinster House as their townhouse in 1745. It would later become the home of Irish Parliament. The first Dail met in the Round Room of Dublin’s Mansion House (over on the aforementioned Dawson Street) in 1919, and generally met in different locations over the following years. However, by 1922, it was time for the Oireachtas to find a permanent residence. For Michael Collins, Leinster House couldn’t be more perfect. It had a 700-seater lecture theatre and its set back location off the main street offered some additional protection from attack. Sadly, Michael Collins was assassinated before he could take his seat in the building he was so taken with.

On the north side of Trinity College, runs Pearse Street, one of the longest streets in Dublin. Previously named Great Brunswick Street, number 27 was the birthplace of Patrick Pearse, one of the executed leaders of the 1916 Rising. The street was renamed after him and his brother Willie in 1921. The name Dame Street refers to a large dam that powered a mill on the River Poddle in medieval times. Since then, Dame Street, like many others in the city has changed considerably. The widening of Dame Street was one of the first projects undertaken by the Wide Streets Commission following its establishment in 1757 which worked to govern standards on the layout of Dublin’s streets, bridges and buildings. Read more about the evolution of Dublin city in our popular post here. Westmoreland Street is named after John Fane, 10th Earl of Westmoreland and Lord Lieutenant of Ireland from 1789 to 1794. It was also developed by the Wide Streets Commission between 1799 and 1805 to connect O’Connell Bridge to Trinity College. Westmoreland Street is home to Cassidy’s Bar. This building was once the home of The Freeman’s Journal, the oldest national newspaper in Ireland and an important medium for Irish people during the 1916 rebellion. Venturing to Dublin’s northside next, we come to Abbey Street, named after the medieval Saint Mary’s Abbey founded in 1139. Much of Lower and Middle Abbey Street needed reconstruction following the Easter Rising including landmarks such as Wynn’s Hotel. Capel Street was named after Arthur Capell, 1st Earl of Essex and Lord Lieutenant of Ireland from 1672-1677. It was built by Sir Humphrey Jervis in the late 1600s and it quickly became a very desirable location for the upwardly mobile looking to get away from the cramped walled city and run down southside suburbs. The area was well known for its impressive mansions. Since then Capel Street has been through its ups and downs, becoming clogged with modern commuter traffic and generally falling into decline. Happily today, it is experiencing a revival, full of popular restaurants, cafes and shops including the country’s best known tailor, Louis Copeland. Henry Street is best known as one of Dublin’s best shopping streets. It was developed and named after Henry Moore, 1st Earl of Drogheda. Arnotts, one of the most notable stores on the street first opened for business in 1843. Legend has it that Patrick Pearse actually dropped into the store to settle his account on the day of the Easter Rising in 1916. Staying on the north side of the city, we have Talbot Street, another shopping street which runs east to west from Connolly station to Marlborough Street. It has played host to a number of tragic events over the years. You’ll find a commemorative plaque in memory of Sean Treacy, one of the leaders of the Third Tipperary Brigade of the Irish Republican Army during the Irish War of Independence. Treacy was shot and killed outside number 94 in a shootout with British troops. If you come here on the day that Tipperary is playing in an All-Ireland Hurling Final you’ll see fans gather to pay their respects at this plaque. Just like Henry Street, North Earl Street was developed by Henry Moore, 1st Earl of Drogheda, this time finding an alternative part of his title to name the street after. The street is probably best known today as home to the life-sized, brass statue of James Joyce, one of Ireland’s most famous authors. The street that takes centre stage in Irish history.

It was originally named Drogheda Street having been laid out by, yes you guessed it, Henry Moore, 1st Earl of Drogheda. It was later acquired by developer, Luke Gardiner and it became known as Sackville Street after the then Lord Lieutenant of Ireland, Lionel Cranfield Sackville.

In 1882, the famous statue of Daniel O’Connell was unveiled, in honour of the Irish political leader who argued for the repeal of the Act of Union 1800 which united Great Britain and Ireland in a ‘United Kingdom’. O’Connell never supported the use of violence and was instead passionate about asserting strength through political channels – his statue features a pile of books at his feet symbolising his ability to use knowledge in his arguments.

Following the unveiling of the impressive O’Connell statue, people quickly began to refer to the street as O’Connell Street, however it wasn’t until 1924 that the name was officially changed. Originally called George’s Lane, the street takes its name from Saint George’s Church which stood here from 1181-1586. It is famous for its South City Markets which officially opened in 1881 and still operates to this day as the much loved, red brick, indoor market George’s Street Arcade. During the War of Independence, Michael Collins and other key figures would meet in the Wicklow Hotel on Wicklow Street. According to eyewitness statements, Collins and his men shot dead the head porter when they were informed that he was a British spy.

The delightful, Mary’s Hardware Bar now sits on this premises and you can learn more about its history and read the eyewitness statements here.